In 2009, Cattelan teamed up with Italian photographer Pierpaolo Ferrari to create an editorial for W Magazine’s Art Issue. In 2010, they founded the magazine Toiletpaper, a bi-annual, picture-based publication.
Cattelan’s manipulation of photos and his publications of magazine compilations such as Permanent Food and Charley did not come about without their influences. The artist attributes his love of finding the uncanny, the silly, or the seductive in just about any mundane or sensational object, as traceable to the works of Andy Warhol.
As Cattelan states, “That’s probably the greatest thing about Warhol: the way he penetrated and summarized our world, to the point that distinguishing between him and our everyday life is basically impossible, and in any case useless.” 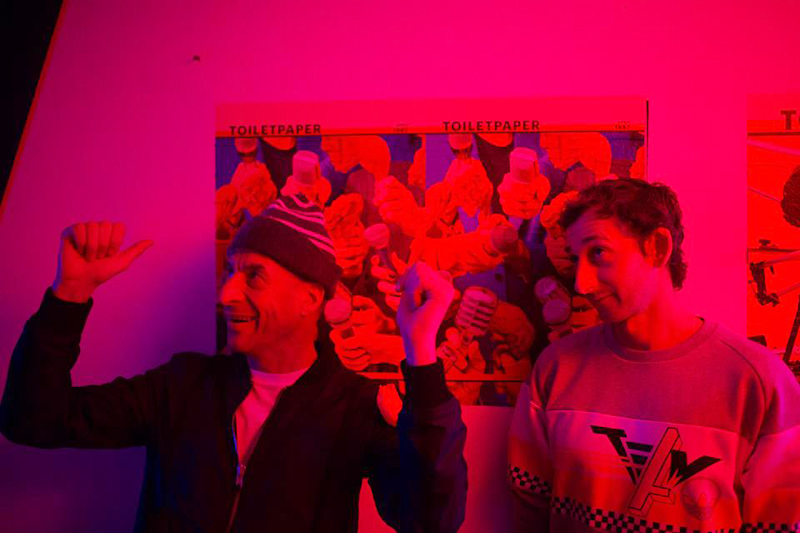 Permanent Food and Charley differ in sophistication. Both consist of crude layouts, having magazine pages compiled together torn from outside sources. The latter, however, was backed by a wide list of recognizable and credible curators. His most recent publication, Toilet Paper, differs greatly from the two previously mentioned, as its photographs were originally planned and designated solely for the magazine. The level of originality for this magazine surpassed the others, providing the audience vague, oddly familiar photographs to peruse through. Toilet Paper is a surrealist pantomime of images that the viewer cannot easily trace back to a starting point, while they’ve most likely been conjured by popular culture. It is a whirlwind of loud colors mixed in with the occasional black-and-white photo: “the pictures probe the unconscious, tapping into sublimated perversions and spasms of violence.”(1)